Thespian action continues, with rehearsals for Fluellen's production of "Othello", in which I play the character of Roderigo. The show runs at Swansea Grand Theatre Arts Wing from 6th - 9th of November, with matinees on the 7th and 8th.

Despite the absence of much else of note hereabouts, I'm not intending to turn this into an "Actor's Blog" - but if occasional updates may amuse, then you might consider following @robstradling on Twitter. Oh, go on...
4 comments:

Email ThisBlogThis!Share to TwitterShare to FacebookShare to Pinterest
Labels: acting

The Sky's Falling For You

I have never knowingly listened to an Adele song before.

Although it's impossible to conduct a modern life without knowing who she is, what she does, and how heavy she is this week, it perversely requires no effort at all to avoid actually hearing her sing. There's a thesis somewhere on how and when Pop Culture ceased to revolve around actual - you know - pop. This isn't it, though.

I had no complaints when Adele was selected to sing the Bond theme; a chart-bestriding diva like her is an obvious choice. So now I've listened to the song... and while I can't say that I love it, it is the first Bond theme for a while not to actually make me bury my head in my hands in despair. I can hum it, for a start - a priceless luxury. And if those unsubtle Bond chords are only there as a lumpen musical counterweight to drag her back on-topic... well I've got to admit that that works.

Bond songs tend to grow on me, and some have started from worse positions than this.
No comments:

The Sounds Of Silas

Interrupting my usual epoch-long silence with a modest announcement. My alter-ego, the nascent thespian Rob Stradling (looks like me but spelled with two silent Fs), will be appearing at Swansea Grand Theatre in September, in Francis Hardy's new adaptation of Silas Marner, by George Eliot.

This gig, for Fluellen Theatre Company, represents my bona fide professional acting debut, after three years of mucking about for Love. It's a leap of faith for Fluellen to take a chance on me, and I intend to work my testicles to cashews in order to justify it.

The play runs at The Arts Wing from September 18-20, with a matinee on the 19th. If my appearance isn't enough to tempt you, there will be original music by the brilliant harpist Delyth Jenkins, fresh from her Voice on the Path tour. Delyth's compositions are already providing a soothing and inspirational backdrop to rehearsals, and the results are sure to be a treat in themselves.
2 comments:

"Civilization, or 'Civ' as we call it, contains many graphic scenes of invasion, genocide and diplomatic aggression" said Dr. John Packman-Dunnett, lecturer in Digital Perversions at Whitehouse College, Durham. "Its online communities are the perfect breeding-ground for would-be dictators and violent revolutionaries to hone their skills."

New evidence unearthed by Dr Packman-Dunnett's team of researchers strongly suggests that an early version of Sid Meier's classic turn-based strategy game was played by young Genghis with his friends on the steppes of Mongolia in the 12th Century. Written parchments apparently show references to Civilization gameplay; one hastily-scribbled line of heiroglyphs appears to say "...Give us more swords, noble leader" and later, "We laugh at your puny threats!"

"This material is clearly inflammatory, and would have had a formative influence on the mind of a young peasant in such turbulent times" said junior researcher Mario Zeeval, "playing this game gave Khan the tools to sweep across Asia in a frenzied killing spree."

Lawyers for MicroProse, original makers of Civilization, have denied that early "beta" test versions of the game were released to the medieval Asian market without proper safeguards and age-restrictions. But this rings hollow to critics, who will see this as another example of the dangers of an unregulated video games industry.

"Where do we think the next Genghis Khan is coming from?" asks Packman-Dunnett with barely-concealed horror. "Is he upstairs in your own home, right now, selling his libraries to build catapults...?"

This post is a satirical response to this story in "The Guardian"... Shame on them.
No comments:

Football fans are being "persceuted" and "marginalized" in modern Britain, according to Fulham legend and former "Match Of The Day" presenter Jimmy Hill.
Hill claims that the interests of fans of the "beautiful game" have been systematically attacked by "...the creeping establishment of a new orthodoxy made up of women, sport-haters and people with a so-called 'sense of proportion'."
"In modern Britain, it seems it's okay to like rugby, lacrosse, bongo-bongo-ball or somesuch" he continued, "but woe betide you if you like a harmless bit of footie. Football is being driven underground. Just take a look at the TV schedule - you'd be hard-pressed to find more than 4 hours of soccer-related content per day on any one channel. Some channels show no football at all!"
Pointing to a spate of recent stories about football fans being prevented from wearing replica shirts in the workplace, Hill cites these as further evidence of an anti-football groundswell. "It's outrageous that people can't turn up for work in a garishly striped nylon vest bearing an inapproproately prominent sponsor's logo. I mean, what's wrong with that?" he pleads passionately. "Some people say they look 'common', but they cost more than an M&S cotton formal shirt and a silk tie, for heaven's sake. It's just more soccerphobia, it's truly disgusting. They wouldn't dare tell a cricket fan he couldn't wear his shinpads to work, just because he was a swimming-pool attendant or something."
Prominent academic and football critic A.C. Pevsner recently accused Hill - amongst other soccer luminaries - of being "...unable to access reality in non-football-related terms", a charge which the "Hero of Highbury '72" firmly rejects. "Not only did Pevsner come at me with a meritless ad hominem argument" Hill retorts, "but he did so from what was quite clearly an offside position."
Speaking from an office in the £800m Wembley Stadium, Hill bemoaned the gradual erosion of football values in this new society. "When was the last time you someone throw themselves to the floor, writhing in imaginary agony when approached by a stranger? That kind of thing is frowned upon now, apparently. Excessive gambling, getting in fights at airports, wife-beating; all these time-honoured traditions are under threat because of the dictats of a few trendy intellectuals and judges. The innocent, every day football fan has become a pariah in his own country." he continues, "He can't even chant one of his sacred hymnals in public without being castigated for sexism, racism, or queerbashism or whatever."
But not everyone agrees with the prognathous pundit. Alison McDonnegal, chairperson of pressure group "Not Again, Isn't There Something Else On?" (NAITSEO) responded "For Mr. Hill to suggest that football fans are being persecuted is disingenuous in the extreme. Some people don't like football. Get over it."
This post is a satirical response to this story as reported in The Telegraph... and just about everywhere else.
1 comment: 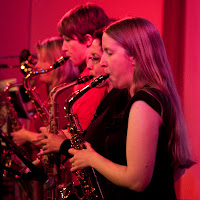 H's accomplices, The Women In Jazz All-Star Band, were at it again at the Swansea Metropolitan Townhill Theatre last weekend, laying down swing standards to an appreciative audience of students and old ladies. There was boogie and good times in the moonlight, and no-one disappeared on the flight home. V for Victory.

Meanwhile, I'm in rehearsals for "Much Ado About Nothing", and struggling manfully to get my share of the script before my colleagues chew it all up. Probably the Shakespeare play I know best, finally getting a go at it is a bit like scoring with an old crush at a school reunion. About the only weakness of the play is that the two "leads", in a large cast, get nearly all the best lines. Even in the major role of Don Pedro, I sometimes feel like I'm feeding off scraps. But that's a churlish complaint when dining at so fine a table. Strike up, pipers!
No comments:

Email ThisBlogThis!Share to TwitterShare to FacebookShare to Pinterest
Labels: acting

I finally underwent arthroscopy (keyhole surgery) at the weekend to perform "capsular release" which - despite sounding like an intriguing option from the menu of a seedy massage parlour - is actually to do with excising inflamed tissue to treat adhesive capsulitis, or "frozen shoulder".

No wince-inducing X-Rays to share this time, I'm afraid; but I do get to walk around in a sling for a few days (again), drugged up the the eyeballs (again), and receiving soothing ministrations from 60s dolly-birds (again)*, all of which seem to be becoming my regular mid-September thing.

Having to turn down work again due to the sling is bloody annoying. I'm hoping to get a "walking wounded" walk-on, one of these days!

* It works better as a one-liner than a full anecdote, trust me.
No comments:

Jonny Morris in Under 300 Words.